The OrtholugeDB database is described in the paper:

The Ortholuge method is described in the paper:

The method for computing the local False Discovery Rate for the Ortholuge ratios is described in the paper:

Ortholuge is a computational method that can generate precise ortholog predictions between two species on a genome-wide scale (using additional outgroup genome for reference). It computes phylogenetic distance ratios for each pair of orthologs that reflect the relative rate of divergence for the orthologs (figure 1). 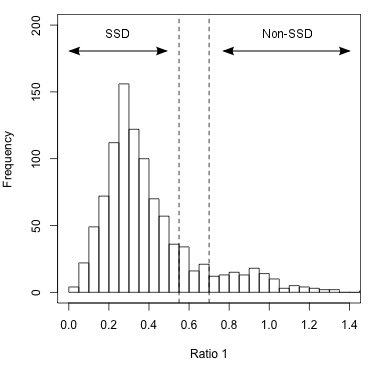 In OrtholugeDB, the reciprocal-best-BLAST-hit (RBBH) procedure is used to generate the initial set of ortholog predictions. Genes are declared orthologs if they are each other's top BLAST hit when each genome is BLAST'ed against the other. The top hit is determined by having the lowest e-value and highest bit score. Multiple RBBHs are possible, and we keep track of all of them (these cases often represent very recent gene duplications). We evaluate the RBBH-predicted orthologs using Ortholuge.

Inparalogs are ortholog genes that have duplicated (subsequent to the species divergence). If the genes duplicated prior to the speciation (and creation of orthologs) the genes are referred to as outparalogs. We identify inparalogs using a procedure based on the InParanoid method, a gene is declared an inparalog if its BLAST bit-score to the ortholog gene from the same species is higher than the score between the orthologous genes from different species. We also check that the inparalog's top BLAST hit in the other species is the same as its ortholog partner from the same species. Inparanoid is described in this paper:

The following Ortholuge classifications are used in OrtholugeDB:

Boundaries between the Ortholuge classifications are determined by the ratios and their corresponding false discovery rates (FDR). Our method for computing a local FDR for a given ratio value is described here:

This local FDR approach is an extension of the Ortholuge method first described here:

The Ortholuge software is available for download from the following site:

We provide the following types of searches to retrieve data from OrtholugeDB:

In the result pages for these searches, the number of inparalogs associated with an ortholog will be listed in the Inparalog column. Clicking on the link in this column will take you to a more detailed view that will list the individual inparalogs and orthologs associated with the genes in that row, along with the ortholog's ratios values and local FDR rates. We have computed the Ortholuge data for inparalogs as well and this data will also be available here.

In this view, orthologs are sets of genes that are reciprocal best BLAST hits of each other. Using this operational definition, multiple RBB orthologs can be identified. Inparalogs are identified using procedures based on the Inparanoid method. If there is no available outgroup ortholog, only reciprocal best BLAST predictions will be available and the column will contain RBB. Further details are available here.

The protein sequences for completely sequenced bacteria and archaea species are obtained through the MicrobeDB resource. MicrobeDB is described in the following paper:

Data can be downloaded from a results page in the following formats:

Data is housed in a MySQL database. We will also provide a MySQL dump of the database upon request.

OrtholugeDB is developed by the Brinkman lab at Simon Fraser University, Burnaby (Greater Vancouver), BC, Canada.

For help or feedback, please email us at ortholugedb-mail@sfu.ca.

OrtholugeDB development has been funded by Genome Canada/Genome BC with the support of Cystic Fibrosis Foundation Therapeutics Inc..